I’m sure many of my readers are curious about the proposed football stadium in the Near North Riverfront just north of Laclede’s Landing, hemmed in today by I-44, I-70, the MLK Bridge and the river. It is an incredibly interesting part of town, one that has seen around 200 years of settlement, having been located just north of the original town of St. Louis. Traveling back one hundred or two hundred years, you would have seen dozens of bustling factories, workers’ houses, a shot tower, and miles of railroad tracks snaking through the area. You would have seen ferries bringing trains across the river, and eventually you would have seen majestic power plants spring up along those rail lines and the Mississippi bank. The Compton and Dry View from 1876, as well as the Sanborn Maps from the early Twentieth Century show just what a bustling industrial neighborhood the riverfront was for over a century. You can see the shot tower above, and below in ruins. So that bustling neighborhood has been mostly eradicated, but there’s still a lot left, and worth examining. Honestly, when I look at the area from satellite images, it looks desolate. But when I’m walking around this area, it doesn’t feel like that. 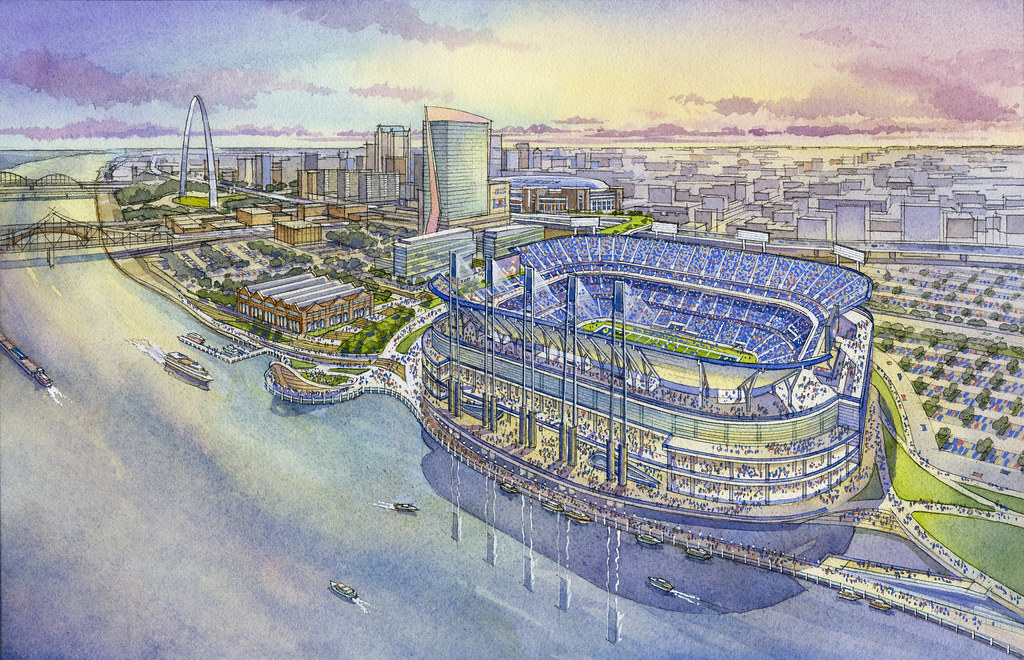 But anyway, the plans for the football stadium would eliminate a huge swath of the area, along with the street grid. I’ve been told that the rendering is largely a joke meant to show “due diligence” on the part of local and state leaders, but the fact that such a silly and absurd plan would even be made public is disturbing.

Buildings that would be demolished The first building, the old Sligo Steel Building, has already been demolished in the last year. But the stunning warehouse below would be demolished too. The ares has already lost so much, including the famed Belcher Sugar Refinery, which had been on the riverfront for generations. The giant Cotton Belt Freight Depot would be right in the middle stadium’s footprint. Old power plants, such as this one with a truncated smokestack, would also be eliminated. Sadly, buildings such as this refrigerated warehouse below, are starting to deteriorate. I’m sure they’ll show a picture like this to justify demolishing everything. Another power plant, this old Laclede one below, would be knocked down as well. Buildings that would Remain The august Ashley Street Power Plant appears in the renderings, though weirdly “cleaned up” for perhaps an Anheuser-Busch restaurant or something. Where the steam for the steam loop that serves downtown would come from if the plant was converted into a tourist destination is not addressed by the stadium planners. Above, this now renovated building is the home of Bissingers Chocolate, and would sit just north of the parking lots. 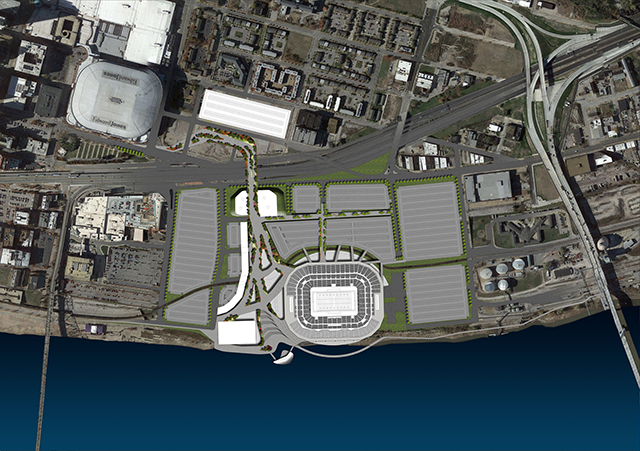 But really, this is all an exercise in futility. They’re never going to build a stadium there with acres of parking lots that sit empty for 358 days of the year. And more importantly, and what is just briefly addressed in the stadium renderings, is that the site possesses one of the most important rail lines in the entire city of St. Louis. At one end sits Anheuser-Busch and a major railyard, and at the other end is Mallinckrodt and the Merchants’ Bridge–not to mention dozens of other customers who use those tracks. That railroad track is not going anywhere. The planners have the rail line snaking sharply around the stadium. Yeah, right. Trains can’t make that sharp of a turn. They would be derailing constantly, on one of the busiest freight lines in the region. This whole thing is just a joke so we can say we tried to present a plan to Kroenke. I bet Nixon and Peacock have never even actually been to the Near North Riverfront.

Update: The stadium fell through when the Rams moved back to Los Angeles in 2016.