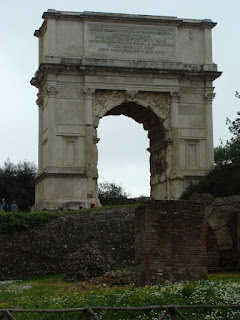 The Arch of Titus is one of the most famous of the many triumphal arches that still grace the city of Rome, but ironically, it originally was one of the smallest of the fifty or so of its type. The Arch of Titus was not built by the Emperor Titus, but rather by his successor and brother Domitian. It commemorates the defeat of the Great Jewish Revolt around 70 AD with the capture of Jerusalem (the fortress of Masada held on for another couple of years). 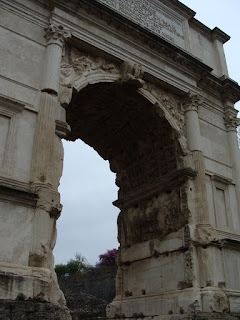 What is fascinating are the two high relief sculpture panels on the interior of the arch. Below, we the Emperor Titus driving his chariot through the streets of Rome during his triumphal parade after his victory in Judea. According to Roman tradition, legionnaires and their commanders were allowed in the city only if the Senate allowed them to celebrate a great victory. The war booty and prisoners would be marched along with the legions, and the victorious general would sacrifice to the gods on the Capitoline while the defeated leaders of the revolt would be executed in the prison nearby. 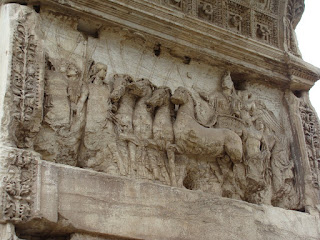 In this panel, legionnaires carry the Ark of the Covenant and a candelabra from the Great Temple of Jerusalem. There is an urban legend that the Vatican still possesses the last relic of the Great Temple, but that is preposterous. The candelabra in question has not been seen for centuries. 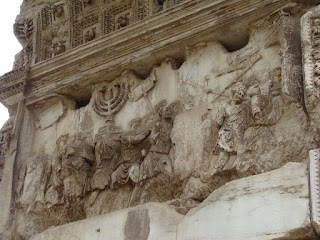 The arch was turned into the gate of a family’s compound after the fall of the Roman Empire, thus accounting for the damage to the interior of the arch. Imagine a giant door attached in the opening, and you can see how it would have been damaged. Much of the nice, clean marble is actually restoration.